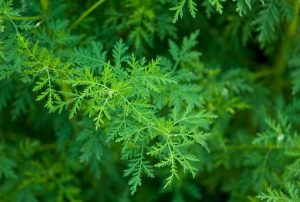 Sweet Wormwood (botanically, Artemisia Annua and also called Sweet Annie Herb) is commonly used for malaria treatment in Chinese Medicine. Modern medicine has derived the anti-malarial drug known as artemisinin from the Artemisia plants. Now, there are several semi-synthetic derivatives of artemisinin are available for the effective treatment of malaria and become part of the prescription drugs.

This plant is native to Asia and contains the active compound called artemisinin, which has been found to possess antimalarial, antiviral, antioxidant, and anti-inflammatory properties. It also contains other beneficial sesquiterpene derivatives, such as arteether, artemether, artesunate and dihydroartemisinin. Because it contains unique compounds such as artemisinin that have antiviral effects, it’s been used to naturally fight conditions including malaria. It also can treat fevers, inflammation, pain due to arthritis or headaches, and possibly other conditions.

Artemisia Annua is useful in the management of the fever occurring due to viral and bacterial infections. It is mainly effective against dysentery, common cold, fungal infections, etc. It is widely used for the treatment of skin diseases, especially systemic lupus erythematosus (SLE), psoriasis and eczema.

Some researchers even believe that artemisia annua plant extracts and artemisinin derivatives may naturally help treat viruses, however at this time it isn’t widely used in this capacity as its efficacy is still being examined.

Artemisia Annua, a naturally grown plant, is from Asteraceae family. Like daisy and sunflower, which belong to the same family, sweet wormwood small yellow flowers bestow gentle aroma along with its other herbal properties. The herb is native to Asian lands having a temperate climate. However, owing to its remedial benefits, it is now cultivated throughout the world.

Artemisia annua is related to other species in the artemisia family that have medicinal properties, such as Artemisia vulgaris or mugwort, and Artemisia absinthium, herbs primarily used to fight parasites.

The artemisia annua plant’s stems, leaves and flowers are used to make several types of medicines, including oral artesunate extracts (which are rich in the compound artemisinin) and topical ointments, as well as natural remedies, such as artemisia annua tea.

This plant is native to Asia and contains the active compound called artemisinin, which has been found to possess antimalarial, antiviral, antioxidant, and anti-inflammatory properties. It also contains other beneficial sesquiterpene derivatives, such as arteether, artemether, artesunate and dihydroartemisinin.

Aside from artemisinin, studies show that A. annua also contains many other antioxidants and phytochemicals, including:  monoterpenes, polyphenols, coumarins, flavones, flavanol’s, phenolic acids, many sesquiterpenes.

Here are the main uses and benefits associated with this plant and its derivatives:

1. Can Help Treat Malaria – Artemisinin-based combination therapies are commonly used with other drugs to treat malaria. Malaria is a disease caused by parasites (Plasmodium falciparum) that is spread through bites of infected mosquitoes.

Systematic reviews have shown that treatments made with artemisia annua are typically as effective as the drug quinine for both uncomplicated and severe malaria.  According to the World Health Organization, a combination of riamet (Coartem), lumefantrine (120 mg) and artemether (an artemisinin derivative) given over two days is effective in treating malaria about 98 percent of the time.

Artemisia annua is also used in the treatment of other infections and illnesses, including leishmaniasis, Chagas disease and African sleeping sickness.

2. Can Reduce Inflammation and Arthritis Pain – Certain studies suggest that due to its anti-inflammatory effects, artemisia may be helpful for treating osteoarthritis symptoms, especially those affecting the knees and hips. It seems to safely help dull pain and stiffness and decrease physicals limitations for up to six months with ongoing treatment.

Researchers believe that dihydroartemisinin, a synthetic derivative of artemisinin, can help arthritis patients due to its ability to reduce inflammatory markers and pathways, including COX-2 production, serine/threonine kinase (AKT) and mitogen activated protein kinase (MAPK) pathways.

3. May Have Cancer-Fighting Effects Due to High Antioxidant Content – A number of reports indicate that A. annua is one of the four medicinal plants with the highest ORAC (oxygen radical absorbance capacity) levels, meaning it is very high in disease-fighting antioxidants. The high antioxidant activity of A. annua extract is most likely due to its high phenolic content, considering it has over 50 different phenolic compounds belonging to five major groups, including flavones and flavanols.

Artemisinin and other antioxidants found in artemisia, especially flavonoids, have been shown to induce apoptosis and have anti-proliferative effects against certain type of cancers, including thyroid, colorectal and lung cancer. It’s thought this plant can help fight cancer due to its ability to decrease oxidative stress and free radical damage.  While this treatment seems promising, more studies are needed to determine which types of artemisia derivatives are safest and most effective in the treatment of cancer.

Risks and Side Effects

Case reports suggest that potential side effects of using artemisia annua may include Liver damage, Hepatitis, Anemia, Vertigo, hearing loss, ringing in the ears and dizziness, Skin rashes, including dermatitis, Digestive issues, such as abdominal pain, diarrhea, nausea and vomiting.

Pregnancy & Lactation – The herb can do more harm than good if it is consumed by a woman in the first trimester of pregnancy.  Artemisia is also not recommended for the lactating mothers.

Special Precautions – Diabetes Mellitus: Artemisia may affect the absorption of the anti-diabetic drugs, which may lead to hypoglycemia. Therefore, blood glucose level should be regularly checked, and dosage should be adjusted accordingly.

Contraindications – If a patient is taking anti-seizure medicine, Artemisia should not be taken as it further induces the seizure, thus reducing the effect of the medicine.

Artemisia annua tea (a traditional Chinese remedy) is also available, although some research has found that artemisinin is not soluble in water, and the concentrations in teas/infusions are insufficient to treat serious conditions like malaria.

Conclusion – Artemisia annua is a plant that has been used in Traditional Chinese Medicine for thousands of years. It’s been shown to have anti-malarial effects as well as cytotoxicity against cancer cells, along with antibacterial, antioxidant, anti-inflammatory and antifungal activities. Now, it is studied for the treatment of cancer. It has anti-cancer, anti-proliferative and anti-mutagenic characteristics.

Some experts believe this plant may help treat viruses. Other uses for this plant extract, whether taken by mouth, intravenously or topically, include fighting some types of infections, fungi, inflammation, arthritis pains and some forms of cancer.

The aerial parts and leaves of Artemisia Annua (Sweet Wormwood) are used in traditional medicine. The leaves and thin stem of the plants are dried and powdered to form colorless crystals to get the required extract.

Artemisia Annua (Sweet Wormwood) contains artemisinin, which inactivates the malarial parasites, but it does not kill them. Therefore, drug resistance with artemisinin is common when it is used alone. In combination with other herbs or modern anti-malarial medicines, it is effective for the management of malaria.

NOTE: The prolonged usage of Artemisia herb must be avoided as it may cause side effects like Nausea, dizziness, and fatigue. An unattended excessive dose of this herb may also lead to neurotoxicity. 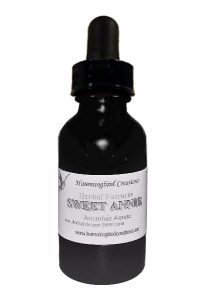 This is made from my fresh, home-grown plants, extracted in 100 proof Vodka (50/50) and allowed to steep for 6 months to make a potent herbal tincture.

Recommended dosage: Start with 15 drops per day during treatment.  Not to be taken indefinitely.  Please read the above risks and side effects.

You can get it here (with our other extracts):

You can learn more about herbs and natural body care products on our blog, and
sign up to receive our herbal newsletter >